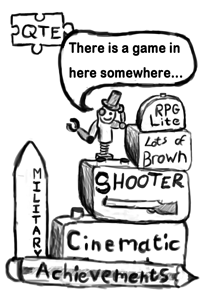 Several weeks ago, triggered partly by work events and partly Diablo III release I started really thinking about why I play[1]. What is Play to me and how can I make games that speaks to my soul and are worth my time in crafting? Sounds grandiose, so let's simplify it.

Which games do I enjoy playing and feel good for having played?

I force myself to purchase, play and dip into the latest game for research and to stay on top of the curve like a responsible designer. At first I thought my lackluster enjoyment was simply gaming fatigue from the industry, but then I started questioning gaming as a past time.

Examining films, television and interactive storytelling such as Pottermore and HomeStuck. Why do I feel enriched by certain novels but feel dirty when logging off a few hours of Diablo? Why does sketching for hours feel satisfying, and building a blocky Minecraft world with my partner fill my heart with joy?

After dissection of games which I personally enjoyed and connected with there were two groups which stood out to me: Personal Pieces and Emergent Experiences.

Personal Pieces which I enjoyed were almost all short, light on gameplay and the creative work of a single person or small team. These pieces must be completable in a single seating and not frustrate or block me at any point. Using touch mechanics, gentle mouse interactions or single button the gameplay should enhance the storytelling and not break it. Less is more.

Studio productions fail at these personal pieces because they are too often meddled with, pulled in different directions and stretched thin to pad out a required length of play time. A good film parallel often mentioned is Citizen Kane, where Orson Welles famously controlled every frame[2]. Authors should also be conscious in this medium that gameplay is secondary and only serves to reinforce the story and that this is totally okay. The key to this group is a personal connection to the audience, a fearless display. As a designer you need a story to tell and the ability to express yourself as a creative force.

The second type scares producers and experienced game developers like the willies. To quote a recent colleague, “I don’t know how to design this”. Well you can’t! Sorry but you need to have an idea, let it loose and ride it like a raging shark whale bear sliding down the mountain. The trick is gently guiding the design and pruning wayward branches. These games have systems, and rules which interact in ways the developer cannot predict and provide a unique unbalanced experience for each player.

Also in these games while a goal or direction may be provided to the play, it should allow the player to explore their own space. These games are also truly social, not flaying Facebook but instead moments which we share with our friends. The Minecraft world we prize, the X-Com team death moments after leaving the ship and physics based explosions of doom.

You are not going to be able to boilerplate produce these games or stamp out several carbon copies. Middleware and established engines will not help you but instead hinder you in the creation of these creative emergent games. You need to inherently understand the rules and game systems and be willing to experiment with them. As a designer to create these games you need to be able to prototype and understand these systems. This is where the programmer designer will flourish even if your code is only prototype, see Spelunky.

Well I hope you enjoyed this little look into my mind and exploration of why games matter to me. It’s a personal exploration and not intended to be a grand exploration on the theme, but instead a single viewpoint. If you're not making games which matter to you personally then is there any meaning to your creation?

If we are to continue to make games meaningful we need to explore new game structures, systems and not be afraid to be personal and fight for every frame.

[1] The irony of this posting slot falling on E3 does not escape me.

[2] I'm not going to get into the game which makes you cry, I think we already have brilliant games but Citizen Kane is a great example of a big production under the tight control of one person.