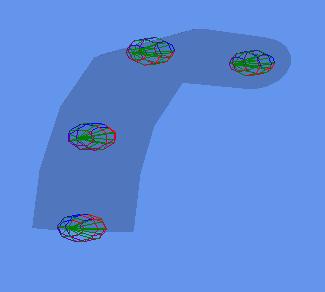 Right I’ve moved over most the nice LD code into the Frank project, cleaned up a few things here and there. Made it play nice with the World Manager system.

First thing I did after getting the camera controls in was apply the debug renderer to the stupid animation problem I’m having. Now to clarify both the Worm and Hand have translation and scale applied. In every way other than complexity they are the same.

As you see the hand bones are in the correct place. What you are seeing are the World Transforms which then are multiplied by the Inverse Bind Pose before being based to the shader. So the job is to narrow it down as follows, I’ve eliminated the strike-out words.

SVN Comments below which sums it up

So any clues on this animation bug?