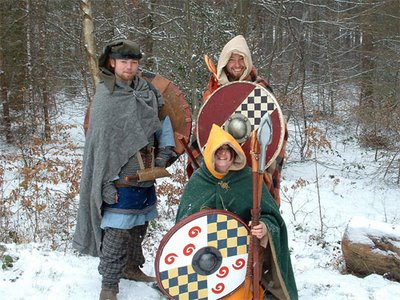 First and foremost I'm a geek. Yes I am I do a lot of crazy stuff but at the end of the day I'm a geek girl who goes fan girl at the worst possible times. As a tribute to my geekiness I have posted a brief history of my LARP character.

Time before has been forgotten, I am as much as the creature of rumor as I am of fate. I shall not repeat what lips tell people on winds of night. I shall tell the tale of the lover scorned for myth and legend holds as much truth as my mind does of that time and place. Many shades and colours of events past lips. Listen to the wind of fate listen to the fade of truth.

Into arms of power and strength the fey maiden was embraced and aside taken. The years or seconds are measured without time. The maiden walked on dream and happiness, a smile for the world. Long ages past and flowed on this path. One day past time the clouds raged betrayal. The maiden furious in her rage confronted her lover an was thrown out like a twig on wind. The maiden begged upon fates and justice on the promises of old. The fates struck a terrible blow to the lover but the maiden was not spared. Cast aside in ages old the maiden was torn asunder from head to toe and as the fates are balanced her life was by a hair saved for gods are dangerous.

From there the tale shades into a million tales from kings and queens to farmers troubles. Wind and mystery follow on wind. Maga ta'Sheel, a black wind of fate or a white light of hope.

My first instinct is to stab you in the eyes and scream at your ignorance however I explain because my own country jumping has taught me the words usage is loose at best. I'm used to a Live Action Roleplaying environment with set characters laid out in a room much like a play without audience or script. The events unfold without guidance and direction, some minor poking at times, into a climax. The LARPs in the majority are single evening events set in a room and played out in one evening. The main stay is talk and political / social maneuvering. The structure involves 13-30 players with 1-3 refs who are ghosts and don't partake.

LARP in the UK and USA seems to be running around the forest with a character you drew up much like a dnd character. The premise is often quick and shallow or deeply involved. The games span months or years. The events include combat with fabricated weapons of foam, and phys-reps of special abilities (bean bag = fireball). These are more combat orientated and tend to be more DND styled. The adventures involve half the players and a handful of refs crewing. This means playing NPC and monsters. The adventure then is broken up into encounters or events.

My wording is obviously colouring which one I like more. The first is found in South Africa as the mainstay. I'm currently playing the second here in the UK. Much fun, but not nearly as good as evening games. At least it gets me out and running around.